Free and Open to the Public, MECA&D’s 2017 MFA Summer Lecture Series Brings Artists and Critics From Around the World to Portland, Maine

Rolling Admissions deadline is May 1 with space permitting. Learn more and apply. 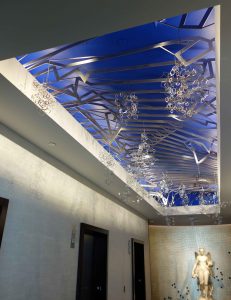 Monday, June 19 at 5:30pm
Jesse is currently an artist in residence at Angels Gate Cultural Center in Los Angeles, California. Prior to that he has worked and shown in numerous places, including Vallauris, France, Jingdezhen, China, and Ernabella, Australia. These experiences have led Jesse to combine a unique range of primitive and high tech processes from distant corners of the globe. His work has consistently incorporated local culture and techniques. Present in all his work is questioning selected norms. This is done using great attention to craft in sculptures that elevate simple utilitarian forms, that are themselves utilitarian, or made from found objects. Recently his work with shadows asks the viewer to trade permanence for an object that reveals cycles. In any case, Jesse's range in scale and materials reflect a studio process formed by the moments necessity rather than overarching ideals or dogma.

Monday, June 26 at 5:30pm
Originally from California Tamara Gonzales has lived and worked in New York for more than three decades. Her work has been exhibited at MoMA PS1, Shoot the Lobster and Martos Gallery, Sargent’s Daughters, Regina Rex, Sometimes (works of art), Norte Maar, and the American Academy of Arts & Letters. Her work has recently been featured in the New Yorker, The Brooklyn Rail, and Hyperallergic. She is represented by Klaus von Nichtssagend Gallery in New York City.

Wednesday, July 5 at 5:30pm
Ruth Erickson is Associate Curator at the Institute of Contemporary Art, Boston. She co-curated the major exhibition Leap Before You Look: Black Mountain College 1933-1957 with Helen Molesworth and has organized exhibitions of the work of artists Rokni and Ramin Haerizadeh and Ethan Murrow at the ICA/Boston. She is currently at work on the first U.S. survey of Mark Dion’s work to open in 2017. Erickson received her Ph.D. in art history from the University of Pennsylvania in 2014 and has published and presented her writing widely. She serves as a visiting critic at the School of the Museum of Fine Arts/Tufts and Massachusetts College of Art and Design.

Monday, July 10 at 5:30pm
Rose Marasco is a prolific photographer and an award winning educator. Her photographs were subject to a large survey at the Portland Museum of Art in 2015. Additionally, her work has appeared in exhibitions at Smith College Museum of Art, the Houston Center for Photography, and the Contemporary Museum in Baltimore. She is Distinguished Professor Emerita, University of Southern Maine. Marasco developed the photography program at USM where she taught for 35 years. Prior to coming to Maine, Marasco initiated the photography program at Munson Williams Proctor Arts Institute in her hometown, Utica, NY.

Monday, July 17 at 5:30pm
Brandon Alvendia is a Chicago-based artist, curator, and educator. His interdisciplinary practice playfully engages spatial and social architectures to envision temporary utopias, regularly performing and exhibiting around North America in collaboration with various artist-run initiatives. He is the founder of multiple Chicago alternative spaces artLedge (2004-2007 w/ Caleb Lyons), BEN RUSSELL (2009-2011 w/Ben Russell), The Storefront (2010-2014), and art-publishing house Silver Galleon Press (2008-present). He was a recipient of the Propeller Fund in 2010, organized a three-act community-oriented experimental dramatic work, Chambre d’Amis, around the theme of place and memory for the Institute of American Art in Portland, ME in 2013, and continues to publish through Silver Galleon Press, which he expanded into a workshop to focus on its performative and communal aspects. As an artist-curator, his work supports the efforts of local and international artists by creating platforms for experimentation, discussion and collaboration. He is working on a nomadic research project ATLAS DRIFT, initiated through the Independent Curators International, based on artist-run culture with stops recently completed in Chicago (w/ threewalls) and Bergen, Norway (w/ Tag Team). Alvendia is a graduate of The School of the Art Institute of Chicago (BFA ‘03) and University of Illinois at Chicago (MFA ‘07).

Monday, July 24 at 5:30pm
Keith Boadwee studied at UCLA in the late 80’s where he worked with Paul McCarthy and Chris Burden. Boadwee produces paintings, drawings and photos that explore his continued fascination with the body, actionism, expressionism, sex, humor, and abjection. His works have been reviewed in publications that include Hyperallergic, Contemporary Art Daily, Artforum, Art in America, The LA Times and the New York Times. Boadwee has exhibited at The New Museum, MOMA PS1, Hacienda, Zurich, Paradise Garage, LA , Shoot The Lobster, NYC, Brennan and Griffin, NYC and Gallerei Deborah Schamoni, Munich. In 2014, Boadwee published a book with Hacienda Gallery and Micronaut Press, “Keith Boadwee: 1989-2013”. For the last decade, Mr. Boadwee has taught at California College of the Arts and San Francisco Art Institute.

Monday, July 31 at 5:30pm
Born in Washington DC to a psychiatrist from Trinidad and a nurse from Jamaica, Sonya Clark’s work draws from the legacy of crafted objects and the embodiment of skill. As an African American artist, craft is a means to honor her lineage and expand notions of both Americanness and art. She uses materials as wide ranging as textiles, hair, beads, combs, and sound to address issues of nationhood, identity, and racial constructs. She has been a full professor and Chair of the Craft and Material Studies Department at Virginia Commonwealth University School of the Arts in Richmond, Virginia for over a decade. Formerly she was Baldwin-Bascom Professor of Creative Arts at the University of Wisconsin-Madison. She holds an MFA from Cranbrook Academy of Art and she was awarded their first Mid-Career Distinguished Alumni Award in 2011. She also holds a BFA from the School of the Art Institute of Chicago. In 2015 she was awarded an honorary doctorate from her alma mater Amherst College where she received a BA. She has exhibited her work in over 300 museums and galleries in Europe, Africa, Asia, Australia, and the Americas. She is the recipient of several awards including an Anonymous Was a Woman Award, an Art Prize Grand Jurors co-prize, a Pollock-Krasner Grant, a Smithsonian Artist Research Fellowship, a Rockefeller Foundation Bellagio Fellowship in Italy, a BAU Camargo Fellowship in France, a Red Gate Residency in China, a Civitella Ranieri Residency in Italy, an 1858 Prize for Contemporary Southern Art, a United States Artist Fellowship, and an Art Matters Grant. Her work is in the collections of the Philadelphia Museum of Art, National Museum of Women in the Arts, Indianapolis Museum of Art, Virginia Museum of Fine Art, Musees d&#39;Angers in France among several other institutions. Several publications have reviewed her work including the New York Times, Philadelphia Inquirer, Italian Vogue, Los Angeles Times, Hyperallergic, and Huffington Post.

MECA&D's Master of Fine Arts in Studio Art program offers a dynamic curriculum​ and supportive learning environment for artists who want to define and pursue a sustainable and attainable vision for their art practice. Learn more and apply. Rolling Admissions deadline is May 1 with space permitting.