Jarrett Mellenbruch MFA ’14, who teaches at the Kansas City Art Institute, has been working on Haven, a functioning beehive sculpture project designed to grow into a nationwide network of 1,000 beehives that provides safe homes for wild honeybees while raising public awareness in the face of mass bee die-offs. He was awarded a $6,000 2016 Rocket Grant by the Charlotte Street Foundation to develop a monitor that will gather and transmit hive data for scientists. The first hive monitor will be installed inside one of his sculptural hives at the Kansas City Zoo. In an interview with The Kansas City Star, Jarrett said, “I designed the Haven hive to mimic how bees live in nature. They are 16 feet tall, they can go in public parks and gardens. The interior dimension is more like what the bees like in nature, usually a hollow tree trunk. There is no supplemental feeding or medication offered to the bees; it is purely a way to observe the way bees live in the wild.”

He also collaborated on the Virtual Vector Laboratory (VVL), a Kansas University interdisciplinary research project that aims to place specially designed photo rigs in the hands of hundreds of researches and residents in Latin America to help investigate and track the insect vector responsible for transmitting the parasite that causes the deadly Chagas disease. The VVL photo rig includes an array of LED lights; is designed to be portable, durable, and intuitive; and incorporates an iPod fitted with a macro lens that uploads images to a server in the university where they are processed by a pattern recognition algorithm. Jarrett is also producing documentary videos for the team to use to increase awareness of this widespread but little known disease. 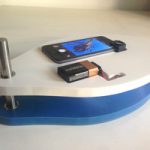 The VVL photo rig is designed to be a portable, durable and intuitive tool for field researchers and citizen scientists.

VVL leader and professor at KU’s Biodiversity Institute Town Peterson said, “Jarrett came in and saw that our pictures needed to be improved. He designed a photo stand that you could stick in your day-sack and assemble in 15 seconds. It's a box with consistent background colors, insect size and a nub to stick the insect on. The upper level has a post for powerful LED lights and a cradle where you just drop in an iPod. The phone can only go in the right position. The cool thing about it is that our colleges in the field can synch the iPod to Dropbox and connect to wifi in the lab, uploading photos in real time."

About his work, Jarrett says "At their core, science and art are both rooted in a sense of wonder in the world around us and melding the two fields to follow a thread of inquiry feels very natural to me. My work is about fostering paradigm shifts and I'll happily jump from one discipline to another to accomplish that."