Design studio JamraPatel LLC has launched its first mobile device app: a keyboard and communication utility for the iPhone and iPad which facilitates the use of N’ko, a West African script. Portland-based type designers Mark Jamra and Neil Patel created the app after researching and designing a N’ko typeface family consisting of ten fonts in varying weights. The app consists of a keyboard, a field for composing emails, messages and tweets, and a predictive dictionary that offers word options in real time. Mark Jamra is an Associate Professor in MECA&D’s Graphic Design Program.

N’ko is the writing system used for the Manding languages of West Africa, a language community of over 20 million people. The Manding languages are Bambara (Mali), Mandinka (Gambia), Maninka (Guinea) and Dyula (Côte d’Ivoire and Burkina Faso). The N’ko script has some similarities to Arabic in its right-to-left reading direction and its connected letters.

“Once we had connected with the leaders of the N’ko literacy movement in West Africa and finished the design of the N’ko typefaces, we noticed there was no keyboard for the N’ko script in Apple devices.” said Mark Jamra, whose recent foray into non-Latin type design was the typeface Phoreus Cherokee. “At about the same time, we learned that an app can act as a delivery system which will insert a proprietary keyboard into the iPhone or iPad when the app is downloaded. A keyboard which uses our fonts can facilitate communication, and mobile phones are such a critical method of telecommunication in these countries.”

Neil Patel was largely responsible for creating the app. “Our goal from the outset was to create something that provided a very typical iPhone experience where none had existed previously,” says Patel. “Our contacts in the language community are enthusiastic about bringing their digital communications to the next level and it’s exciting to be a part of that.”

JamraPatel is a Portland, Maine based design studio that creates innovative type systems in non-Latin scripts for use in under-served language communities in the U.S. and abroad. They also design logos, wordmarks, and custom proprietary typefaces for the comprehensive branding strategies of businesses, organizations and publications. 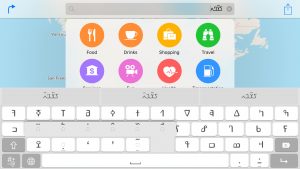