Congratulations to Jack Mauch '06 (Ceramics/Woodworking & Furniture Design double major)! The Society of Arts and Crafts announced Jack as this year's Mineck Foundation Furniture Fellow. This fellowship awards $25,000 annually to an artist who demonstrates skill and commitment to their craft.

The John D. Mineck Foundation, formed in 2007, awards gifts reflecting John D. Mineck's interests and values to support the craft he loved. The Foundation created this Fellowship to encourage and support a young-in-career furniture artist with the financial assistance to help them succeed in their journey.

John D. Mineck Foundation's statement on Jack Mauch's entry:
"His application thoughtfully detailed the ways the Mineck Furniture Fellowship can fund three interrelated goals that would have an immediate and long-term impact on his career: to buy equipment that is necessary for his continued growth and independence; to undertake a course of study in digital fabrication technology; and to dedicate a period of time to the development of his current work that focuses on patterned veneer surfaces by exploring the possibilities focusing 3D modeling and CNC milling to aid in veneering compound-curved forms and complex geometry. Stay tuned for updates from Jack as he progresses through the fellowship." 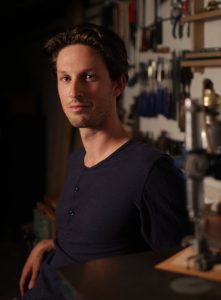 "As one of five children in a family that values art more than procedure, no one objected when I elected to drop out of high-school at age16 to begin studying at the Maine College of Art & Design. I double majored in Ceramics and Furniture Design, and ultimately graduated with a BFA in Ceramics. I moved to Cambridge, MA where I worked for the Department of Exhibitions at the Harvard Graduate School of Design and taught woodworking as a Non-Resident Tutor of the Arts at Harvard’s Eliot House. Seeking to expand my creative vision and technical abilities I obtained a two-year Core Fellowship at the Penland School of Crafts where I conducted a broad, multi-disciplinary study of materials and craft processes, and began much of the inquiry that drives my work today. I currently work in my studio in Allston, MA, but frequently travel to participate in artist residencies and to teach workshops. My work has been exhibited in the United States, including at SOFA Chicago, the Penland Gallery and the Center for Furniture Craftsmanship and has been featured in American Craft Magazine and on the Popular Woodworking Blog." 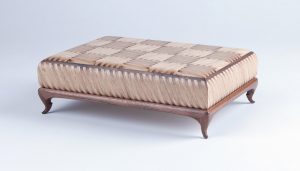 "I began this work in the early Spring of 2015 while attending the remarkable Haystack Open Studio Residency on Deer Isle, ME. It was an off-hand comment by a fellow resident about sand shading that inspired me to experiment with the technique. Sand shading is a technique in which veneer is darkened by being burned in hot sand. Because the sand is hottest near at the bottom of the pan and cooler near the top it creates a natural gradient effect. Rather than using it in the traditional way to create shadow effects for marquetry images, I began using it as an abstract graphic element in parquetry patterns. I had already been making patterns out "sticks" of veneer and I realized that by augmenting these tiny modules with sand shaded gradient I could create visually complex–even jarring–patterns. I implemented this process at a large scale in a later project, Six Around One."