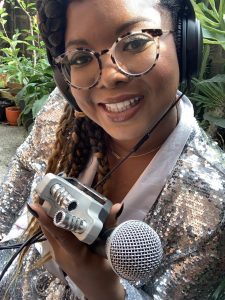 We are thrilled to welcome award-winning audio journalist CC Paschal (she/they) to the Salt faculty this year! In addition to creating podcasts about art, culture and politics, CC focuses on teaching non-extractive, trauma-informed storytelling practices.

Before joining MECA&D, CC was an editor on NPR’s critically acclaimed narrative series Louder Than a Riot, about the interconnected rise of mass incarceration and hip hop culture. She also edited Invisibilia, the award-winning independent show The Heart, and Malcolm Gladwell’s Broken Record. In 2017, she was a lead producer on Gimlet Media's Peabody award-winning production Uncivil.

CC was the founding program manager of PRX’s Podcast Garage—where she created the inaugural curriculum—and served as an Executive Fellow at the Corporation of Public Broadcasting in 2013. There, she researched, analyzed and developed business and media strategies for young diverse audiences, including podcasting.

Currently, CC is developing a new season of her own show Spark, a podcast about the perils and paradoxes of creativity and working on her forthcoming book Audiocraft, The Art and Business of Making Podcasts that Mean Something (Routledge, 2022).

Learn about the Salt Graduate Certificate in Documentary Studies