As a part of the Collective Actions exhibition in the Institute of Contemporary Art was the Public Engagement Capstone and Converging Roots/Verdant Bloom. This exhibition was on view from Friday, April 1 — Friday, April 22, 2016.

The Public Engagement Capstone is the culminating experience for seniors in the Public Engagement Minor. Students work independently with their chosen community partner to develop a proposal and socially-engaged art project that creatively addresses a local or national issue within a real world context. 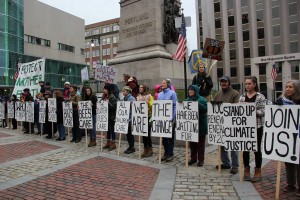 "Sarah’s passion, as well as her artistic work and aspirations, are deeply invested in creating positive change, building community, and creating a healthier planet. She leads the MECA student group Trash Talkers, an environmental group that takes action institutionally as well as within the community of Portland. Since the focus on climate is also a global issue, the group participates in global actions such as 360’s Global Climate March, organized around the Paris Climate Summit. Sarah’s work also focuses on institutional goals such as composting in the MECA Cafe, recycling, and conserving energy." 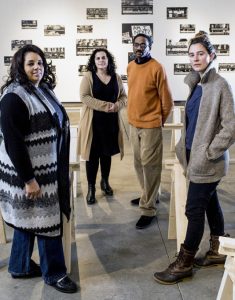 The Public Engagement program at Maine College of Art, in partnership with The Abyssinian Meeting House, held STILL STANDING, a live storytelling event, at the Institute of Contemporary Art at MECA. The event was a culmination of the project and community partnership with The Abyssinian Meeting House, faculty member and local storyteller (creator of the HEAR TELL series) Elise Pepple, and her students in the Public Engagement course Storytelling 101.

This past fall, MECA’s Storytelling 101 class collaborated with The Abyssinian Meeting House to celebrate its story. For this project, students interviewed African American elders in Maine, to create an archive of stories to be housed at The Abyssinian Meeting House. By documenting these stories, the partnership aimed to celebrate the contribution and experience of African American elders by creating an archive of stories for future generations. Still Standing is the culminating event to celebrate the importance of African American experiences in Portland and communicate the significance of this history in the state of Maine.