About Institute of Contemporary Art at MECA&D Past Exhibitions Some Things We Can Do Together: Megan and Murray McMillan

Megan and Murray McMillan make large scale projects that result in short videos, installations and photographic series. Constructing complex, architectural sets that become stages for video and photography, the McMillans create works that offer a window into seemingly impossible situations. Their intention is to find a connective thread between the temporality of video and the observational distance of photographs to imaginatively situate the viewer inside metaphorical, visceral, fabricated environments such as the coal bin of a decommissioned power plant or on a small boat circling an island in the Gulf of Finland. Employing a varied lexicon of elements throughout their work – vessels of transport, theatrical stages, bridges, passageways, rooms – the McMillans create magical, transportive journeys.

Megan and Murray McMillan have exhibited their large-scale video installations at Mass MoCA in Massachusetts, the Kunsthallen Brandts Museum in Odense, Denmark, The State Museum of Contemporary Art in Thessaloniki, Greece, The RISD Museum in Rhode Island, and the deCordova Museum in Massachusetts. Their work has been included in numerous group exhibitions, film festivals, and international biennials.

Some Things We Can Do Together: Megan and Murray McMillan, curated by J.R. Uretsky, was first exhibited at the New Bedford Art Museum/ArtWorks! in New Bedford, MA. 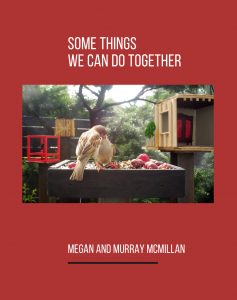 Please join us for a Live Catalog Launch and conversation with Megan and Murray McMillan on June 25, from 6:30–7:30pm. The catalog will be made available digitally and the McMillans will join us for a brief talk about their exhibition in the ICA, followed by a screening of their new work, Some Things We Can Do Together, and a Q+A.

This 96-page full-color catalog, containing essays by curator J.R. Uretsky and ICA Director Julie Poitras Santos, includes a conversation with the artists and a sketchbook section that provides insight into their practice. Design by PATH | Samantha Haedrich.

This event will take place on Zoom; please register for the event via the form below.

The ICA Live Catalog Launch for Some Things We Can Do Together: Megan and Murray McMillan is supported by a grant from the Maine Humanities Council.

Listen: A Conversation with the Artists

ICA Director Julie Poitras Santos speaks with artists Megan and Murray McMillan and curator J.R. Uretsky of the New Bedford Art Museum/ArtWorks! about the exhibition Some Things We Can Do Together: Megan and Murray McMillan. The McMillans look back on more than fifteen years of collaborative practice and share stories and thoughts about their working process. Tune in below to hear the conversation.

National Poetry Month in the ICA 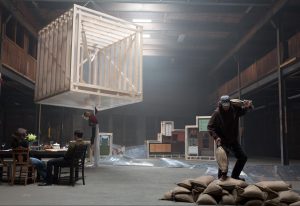 Megan and Murray McMillan, When We Didn't Touch the Ground, photograph, 2012

As we make our way through the shifts and changes during the COVID-19 crisis, art and poetry provide solace and alternative perspectives. They give us both room to see ourselves now and to imagine possible futures.

Our current exhibition, Some Things We Can Do Together: Megan and Murray McMillan, presents over a decade of collaborative work by the McMillans. The works tell stories with images, stories you are invited to imagine as you experience the work. In fact, artist Megan McMillan started as a writer. She says, ”I went to school originally in creative writing and got a degree in rhetoric, creative nonfiction, and poetry. So that was really where I was coming from. I wanted very much for the work that I was making before to be able to move forward into this different realm, this visual realm.”

Megan and Murray have known each other since they were kids, and started collaborating in 2002. Early on they thought of their works as tone poems. The works are “very short, we’re focusing on mood, we’re focusing on metaphor, we’re focusing not so much on character. We’re really thinking a lot about atmosphere, and we’re thinking a lot about how objects relate to other objects, what people are doing in spaces.” Like tone poems which use music to evoke mood and inspire listeners to imagine certain scenes, the McMillans’ works are narratives without words that share a strong relationship to the metaphors and images distilled within poetry; they give us space to enter the work on our own terms.

J.R. Uretsky, who curated Some Things We Can Do Together: Megan and Murray McMillan at the New Bedford Art Museum in 2019 notes that a poem, as described by Claudia Rankine in her 2004 book Don’t Let Me Be Lonely, “is both an extension of self as well as an exchange. A poem is active; the poet extends fragments of herself to be received by a reader. The reader then adds their own experience to the poet’s, and the original poem becomes something else entirely. Like Rankine’s poem, each of the McMillans’ videos offers an extension of self as well as several opportunities for exchange between viewers.”

“We were really interested in moving away from the text but letting the visuals work as their own text.” says Megan. “So that became kind of a guiding principle for us as we were thinking about these [works]. It also helped give credence to the short form, because we thought we don’t have to make a full length feature film, we’re not writing a novel. This is what we’re doing. We’re thinking about this in these very specific, concrete, even haiku-esque videos.”

Q: What poetry is on your bookshelf these days?

J.R. Uretsky, Curator New Bedford Art Museum/ArtWorks!: In addition to Rankine, Sylvia Plath, Wendell Berry, Audre Lorde, Anne Carson, Eileen Myles, Mary Kim Arnold, and Sandra Cisneros occupy my shelves and my thoughts these days, as does What Saves Us: Poems of Empathy and Outrage in the Age of Trump which at this point feels like necessary reading. Wild Geese by Mary Oliver is one of the most important works of American art and basically nursed me through my 20s. I find myself returning to it now, as a source of comfort in this crisis.

Julie Poitras Santos, Director of Exhibitions, ICA at MECA&D: I’m reading Deaf Republic, by Ilya Kaminsky. It’s a series of poems that operate as a parable for our times. The narrative unfolds in relation to an act of violence and an act of protest, of refusal; the citizens coordinate their dissent through an invented sign language, which is illustrated throughout the book. I’m also really enjoying reading Arthur Sze’s new book, Sight Lines, and catching up with Tracy K. Smith’s 2011 work, Life On Mars, both poets alternate an intimate focus with expansive vision.

Forbes: Travel Through Centuries Of Art History And Contemplate The Moment In Large-Scale Installations By Wife And Husband Artist Team, Natasha Gural (Sept. 2020)

Featured Image: Some Things We Can Do Together: Megan and Murray McMillan, ICA at MECA&D, 2020