Razzle Dazzle Sis Boom Bah elicits a boisterous form of misdirection. The first half of the exhibition’s title references organized sports and warfare, strategies designed to confuse the opponent through aggressive motion and dramatic flair. Equally boisterous, Sis Boom Bah is the prototypical cheerleading chant that describes a fireworks display. Together, these words convey the enthusiastic subterfuge of Karen Kraven’s new exhibition at ICA at MECA&D. 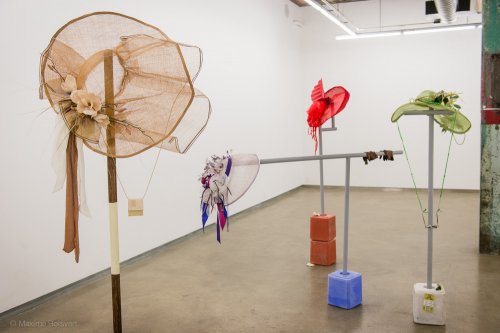 Karen Kraven’s works set up unexpected encounters between sculptures and images, uncanny resemblances and misleading juxtapositions. Like a stage or film set that’s been frozen in time these spaces confound and delight, borrowing the tactics of a con artist. Kraven exploits the illusion and attraction found in such pursuits as horseracing, hunting and fishing, and counterfeiting. These motifs take the guise of everyday items, handmade surrogates and decoys. Shifting and mutating, they collapse upon one another, mesmerizing us as they reappear enlarged, divided, transubstantiated, inflated, and flattened. First presented at the initiative of Montreal’s Darling Foundry in 2014, Razzle Dazzle Sis Boom Bah has been reconfigured and expanded with new work produced onsite at MECA&D.

Born in London, Ontario, Karen Kraven holds an MFA from Concordia University in Montreal, where she was the recipient of the Dale & Nick Tedeschi Fellowship. Based in Montreal and represented by Parisian Laundry, she has also exhibited at Centre Clark, Montreal, Leonard & Ellen Bina Gallery, Montreal, Blackwood Gallery, University of Toronto Mississauga, and Neubacher Shor Contemporary, Toronto. She is in residence at the Darling Foundry’s Montreal Artist's Creation Studio (2013-2016). 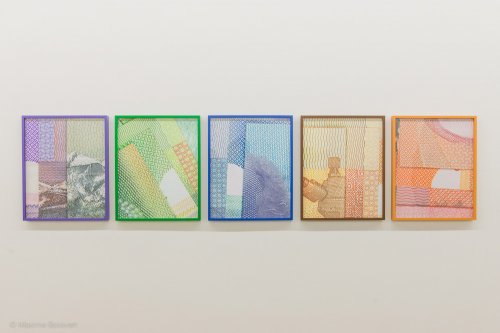 Nicholas Brown is a Canadian curator recently based in New York. He was one of the curators of the multi-site exhibition “Shaping Community” at Yale University in 2012. Nicholas curated "You had to go Looking for it" in Toronto's financial district for Scotiabank Nuit Blanche 2011. He was the founding Director/Curator of Red Bull 381 Projects in Toronto (2008-2010). Nicholas has contributed essays and reviews to Fillip, Hunter and Cook, and Cura. In 2012, he was awarded the Darling Foundry’s Residence of the Americas, sponsored by the Conseil des Arts de Montréal.