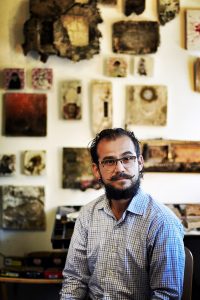 A Syrian artist and architect, Mohamad Hafez was born in Damascus, raised in the Kingdom of Saudi Arabia, and educated in the Midwestern United States. Expressing the juxtaposition of East and West within him, Hafez’s art reflects the political turmoil in the Middle East through the compilation of found objects, paint and scrap metal. Using his architectural skills, Hafez creates surrealistic Middle Eastern streetscapes that are architectural in their appearance yet politically charged in their content.

Responding to the atrocities of the Syrian war, Hafez’s recent work depicts cities besieged by civil war to capture the magnitude of the devastation and to expose the fragility of human life. However, in deliberate contrast to the violence of war, his art imbues a subtle hopefulness through its deliberate incorporation of verses from the Holy Quran. At the core of Hafez’s work, the verses offer a distinct contrast between the stark pessimistic reality of destruction and the optimistic hope of a bright future. Scenes reiterate narratives from the Qur’an to affirm that, even during the darkest of times, patience is necessary for the blossoming of life and that, eventually, justice will prevail.

Hafez work reflects his deep interest in the cross-disciplinary exploration of street art and the realistic, yet ironic sculptural work. He purposefully infuses a stark contrast between the scenes he creates and the messages imbued in his work. Messages could be verses from the holy Qur’an, audio recordings from his homeland, or other elements of Islamic heritage reflected in the architectural typography. Qur’anic calligraphy is presented as spray painted acts of revolutionary protest or as an audio loop from a hidden source to defy the iron fist of dictatorship regimes in the region.