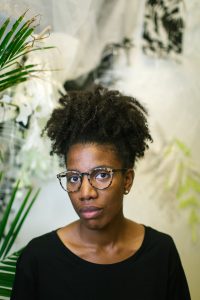 Born and raised in Paris, France of Haitian heritage, Edwige emigrated to the United States at the age of 9. She received her Bachelor of Fine Arts in printmaking with honors from the Maine College of Art. Her work has been exhibited in Maine, Connecticut, Oregon and New York. Edwige was awarded the St. Botolph Club Foundation Emerging Artist award in 2013 and a Maine Arts Commission Good Idea Grant in 2011. Edwige has printmaking art project with the Edmunds Consolidated Schools in Edmunds, ME and participated in several group shows that explored issues of race, including The Other Side of Shade (2013) and Undoing Racism in the Joanne Waxman Library at the Maine College of Art (2009). In addition to her art based projects, Edwige has been an artist resident at Tides Institute & Museum of Art in Eastport, ME, the Quimby Colony in Portland ME and the Vermont Studio Center in Johnson VT. She is currently an advisor to the People of Color Fund at the Maine Community Foundation. She lives in Providence, RI with her husband and son.