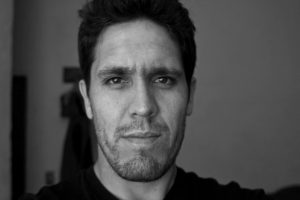 Daniel Quintanilla is a documentary filmmaker and virtual reality storyteller who grew up in a multicultural home in Mexico City. As a teenager, Daniel’s family moved to the United States in search of a better education and more opportunities.

Today, a large part of his work, whether it be traditional film or VR storytelling, explores ideas related to the experience of people being uprooted and/or having to adapt to a new home . In the wake of the 2017 travel ban, Daniel created the project A SHARED SPACE, which is a collection of virtual reality experiences focused on Maine minority communities. In these VR films, viewers are transported into spaces they may not otherwise get a chance to experience.With support from the Kindling Fund, these films have been made public in numerous towns and cities throughout Maine as sidewalk pop-up VR hubs.

United YES
Based in Lewiston, Maine, the United Youth Empowerment Services was founded April 18th, 2016 by four twenty-something family men knowledgeable about refugee community needs, enthusiastic about educational filming, and willing to volunteer our time for the good of our people.

United Youth Empowerment Services (United Y.E.S) is the brainchild of four friends who grew up together in Lewiston after being transplanted from Southern Somalia through Kenyan refugee camps to Maine. They share a love of multimedia production and maintain a firm commitment to helping the community. Along with four young women who have recently joined the Board of Directors, they aim to unite these twin passions in projects to educate our struggling youth by producing instructional yet edifying short films to be posted on social media for teenagers to consume. In addition, they envision the transfer of media production skills to younger African immigrants being central to their mission.

The United Youth Empowerment Services has been creating multi-cultural narrative films and documentaries for the Immigrants population in order to encourage refugee youth towards positive choices. Through lenses, we entertain and educate our community.

We envision simple, free, web-based, mobile-ready creative tools along with a thriving marketplace of interactive elements. Like virtual Lego, these elements can be clicked together to tell new playable stories.

A massive, sprawling, playable universe emerges. Storylines and characters weave between the many worlds in a web as complicated and tangled as the Web itself. It’s a space that you could explore indefinitely, new surprises to be found around every corner. And, when you’re feeling inspired to create, you can jump right in wherever you happen to be.

To learn more about this collaboration, check out |AT THE PERIPHERY|