About Institute of Contemporary Art at MECA&D Past Exhibitions Jan Piribeck: The Qajaq Journey

The Qajaq Journey is an animated short about a virtual kayaking trip that begins in Portland, Maine and progresses along the west coast of Greenland all the way to the North Pole and back again. The narrative is inspired by Josephine Peary’s memoir, My Arctic Journal, which chronicles an expedition to Greenland made in the late 1800s with her husband, the explorer Robert Peary.

The  Peary’s expedition aboard the steamship Kite provides a snapshot regarding the ethos of 19th century exploration. Arctic exploration reflected national identity, and Josephine Peary’s relationship to this identity was paradoxical. She played the role of the conventional wife who supported her husband’s reputation as a national hero while simultaneously disrupting the status quo by accompanying him on expeditions to the far north. Regardless of how the Peary’s were viewed then and now, Josephine Peary left a compelling narrative about the Arctic and its people.

The Kayaker is an avatar for women who upend social norms and disrupt the status quo. She is a wisdom seeker in the age of the Anthropocene. Her journey begins in a tidal basin called the Back Cove; while paddling there she discovers a culvert, which becomes a portal into a metaphysical space. She travels backward and forward in time and discovers that what happens in the Arctic doesn’t stay in the Arctic. Changes in the Arctic impact the entire world and also have a powerful effect on the Kayaker.

The animation alludes to the 20th century race to the North Pole and strives to provide an alternative to today’s race to claim resources embedded in the Arctic’s thawing terrain. It was produced for The Moving Tides Project, a University of Southern Maine Digital Humanities initiative funded through the Maine Economic Improvement Fund. 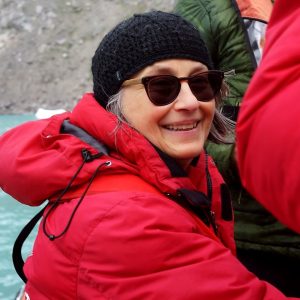 Jan Piribeck is a Professor of Art at the University of Southern Maine. She has an MFA from Northern Illinois University in Painting and Drawing where she also studied Computer Imaging. For over a decade the focal point of her work has been a series of projects that fuse Art and Geographic Information Science. She helped establish the Digital Art Concentration offered by the USM Art Department and often works with students on collaborative research/creative projects that merge Art, Science and Technology. She has been a Visiting Artist/Professor at schools of Art, Architecture, Design and Engineering in China, France, Germany and Latvia