Two Maine artists return home – elin o'Hara slavick with After Hiroshima, a project from the Far East, and Shane C. Smith with Avi Form, a project about the Downeast Penobscot living on Indian Island, Maine. 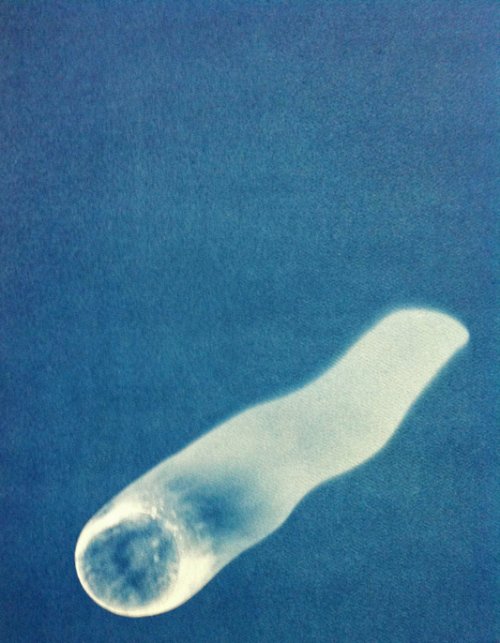 Both artists pay special attention to the specific cultural sites on which they work or to which they refer - Hiroshima, Japan (the Far East) and the Native lands of the (near Downeast) coast of Maine. The archive, cultural memory, the past and its power in the present, loss of histories, people and lands, artifacts, the performative gestures of remembering, honoring and witnessing all play important parts in this work. East to East investigates these dynamic explorations of history, memory, loss, language that artists make as cultural storytellers and producers. The work is deeply engaged in the physical trace - be it photographic, indexical, handmade, sculptural, textual or performative.

elin o'Hara slavick grew up in Portland, Maine, and took her first photography class at the Portland School of Art (now MECA&D). Slavick, who has never shown in Maine, is currently a Professor and the Director of Graduate Studies in Studio Art, Theory and Practice at the University of North Carolina at Chapel Hill, where she worked with Shane C. Smith on an independent study for the fall, 2014 semester, in which he produced some of the work in this exhibition.

Shane C. Smith was born in Bangor and grew up in Milford, Maine, between Old Town, Indian Island and French Island. Smith, a conceptual and performance artist, utilizes an intermedia approach to investigate the subject and language within histories as they relate to place. His socially based practice has led to designing and building a playground in Uganda, Africa and a stop-motion film featuring Penobscot Native American mythology that premiered at the Taos, New Mexico Talking Picture Show. After earning his MFA from UNC, Chapel Hill, he will continue his studio practice in New York City.

For the artists, this exhibition grows out of the mutually beneficial and equally challenging relationship between mentor and mentee. One instructs the other and the other teaches a new language.

From the A-Bomb and Hiroshima to Indian island and Home

Theresa Secord is a Penobscot basketmaker and director of the Maine Indian Basketmakers Alliance. Theresa apprenticed with Elder basketmaker Madeline Shay, one of the last speakers of the Penobscot language and a central inspiration for artist Shane C. Smith. In 2003, she became the first U.S. citizen to receive the Prize for Creativity in Rural Life, granted at the U.N. in Geneva, Switzerland. In 2009, Theresa was named a Community Spirit Award recipient by the First Peoples Fund, and in 2010, she presented the keynote address at the Indigenous Weavers International Symposium in New Zealand. Theresa was named the 2011 Traditional Arts Fellow for Maine, and is a member of the Maine Arts Commission, where she actively advocates for and supports artists.

Peter Shellenberger '90 is a photographer who draws from the history of science and photography and the knowledge gained from going to flea markets and garage sales, where he learned that the red-orange Fiestaware glaze of the 1930s and '40s utilized uranium oxide -- the same uranium used to make the atomic bomb. The uranium remains radioactive in the Fiesta dinnerware. Inspired by this radioactivity, Shellenberger experimented with films, lengths of exposure and objects to make photographic silhouettes -- or autoradiographs that are similar to elin o"hara slavick's autoradiographs of A-Bombed artifacts from the Hiroshima Peace Memorial Museum. He majored in Photography at MECA&D and is a former Assistant Professor in MECA&D's Photography Department. Shellenberger's work was recently included in Both Sides of the Camera: Photographs from the Collection of Judith Ellis Glickman at the Portland Museum of Art and You Can't See This: Photographs at the Limits of Visibility at the Bowdoin College Museum of Art. His work has also been exhibited at Zero Station, the University of Southern Maine and the Center for Maine Contemporary Art.