ACOUSTIC RESONANCE presents sound as an artistic medium and tool of transformation in our culture today.

Anyone who has been to a rave or rock concert knows the visceral effects of sound can be all too palpable. In today’s urban landscapes we must sift through myriad overlapping soundscapes to navigate our way through contemporary life; our rural soundscape is punctuated by nearby highways and overhead cross-continental flights. John Cage’s 1952 work, 4'33'', famously sought to provoke listening on the part of the audience by making audible the real noisiness of silence.

Visual artists, like musicians, have used sound as a medium to shape and construct, and in so doing have sought to transform a viewer-listener’s experience. Sound travels through the air and our public spaces, and resonates in our bodies. It carries across neighborhoods and through fences - even at a distance it communicates our longings for each other and our desires for change. Sound can evoke memory, communicate across barriers, claim a space, or transform a city. ACOUSTIC RESONANCE foregrounds the power of sound to connect and transform us.

ACOUSTIC RESONANCE highlights the vital art and music intersections at Maine College of Art & Design, in particular the Bob Crewe Program in Art and Music at MECA&D. The exhibition will be accompanied by numerous public talks and sound art events.

ACOUSTIC RESONANCE is organized by Julie Poitras Santos, Director of Exhibitions, ICA at MECA&D, in collaboration with Steve Drown, Coordinator of the Bob Crewe Program in Art & Music, and supported in part by grants from the Crewe Foundation and the Onion Foundation. 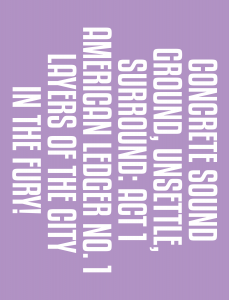 All lectures are virtual unless otherwise noted. This page will be updated with zoom information before the lecture.

My current focus is on text and language as the foundation of sound based narrative. In this real time installation for the ICA, the performance uses dozens of samples of both spoken and computer generated words and texts. I’ve developed my own sample and synthesis software to achieve these goals. The samples of speech will be combined and broken down to their smallest possible parts, so that the sounds generated will transform from short and rhythmic to dense events to dense and layered drones. The work involves multiple forms of synthesis and sound manipulation.

Patrick Carey is a sound musician and technologist from Portland Maine. His practice lies at the intersection of research, computer programming, and traditional recording and performance. Deeply interested in the history and present of Computer Music and how it’s tropes inform the entirety of modern music creation, Carey’s works identify with the contemporary idea of “sound music”, practices that are steeped in the sound art and experimental tradition but are presented in the medium of more traditional “music”. He performs and records under his own name and runs a small record label focused on experimental sound and technique.

John Fireman is an artist focusing on new media, including documentary film, video, sound, installation, interactivity, and live performance. He has received degrees from Yale University, New York University, and the Maine College of Art & Design, where he is currently an adjunct professor.Steve Drown, Coordinator of the Bob Crewe Program in Art and Music, has been involved with the program since its inception. He’s spent the past 30 years as a working music and audio professional, as well as an educator. Steve studied synthesis and recording at Utah State University before transferring to the Berklee College of Music to complete his Bachelor of Music degree in their Music Production and Engineering program. After college he was in an original rock band, The Common Ground, before pursuing a career as a recording engineer and producer. During his career, he has recorded and produced hundreds of albums and multimedia projects with a wide variety of artists, working in studios and on location in the U.S. and Europe. These projects range from death metal, bluegrass, alternative rock, hip-hop, orchestral, film scores, jazz, flamenco, pop, to mixing network documentaries and independent films.

Injecting meditative song and sounds of nature directly into the bustle of Portland, as a sonic interruption, Sowing Songs will affect how viewers experience their daily routines. A passerby might stop for a while to listen but then return to their commute. Even this brief interjection will hopefully act as a moment of reprieve. The SoundLetters were made during this summer as an antidote to the uncertainty I was experiencing; the work is intended to be meditative and peaceful.Annika Earley is an interdisciplinary artist who works in both visual and sound media. Earley makes multidisciplinary work about transformation, in-between states, and the experience of being a woman, often using folktales and folk music as reference points for her work. In Earley’s sound work, she is most interested in the phenomenology of singing. “Not only does singing create an intimate contract between performer and listener, it also has a profound physical effect on the singer as the vocal vibrations massage internal organs and lower stress responses. The act of listening is also deeply transformative; listening is, in some ways, an act of trust and vulnerability. Through dense harmonies, my work offers the listener a moment of this intimacy.”

A single-narrator, weird fiction audio drama series, The Darkroom follows an amateur photographer and the discoveries and stories that come to light as he recovers and develops old rolls of film he finds in abandoned, antique cameras. The aesthetic of The Darkroom is surreal, ominous, strange, New England noir underscored by the narrator - a reserved, introverted, curious (sometimes dangerously so) photography hobbyist with an eye for unusual equipment and strange images. The Darkroom is written and performed by Ian Harriman and the original score, sound design, and audio editing is done by Ryan McGowan. We have been producing the show since October of 2018. The show is available as a podcast through most podcatchers. www.thedarkroompodcast.com

Visitors are invited to step on playable pads on Congress St. which activate sounds and a kinetic light sculpture. Play Object is an opportunity for strangers on the street to create spontaneous compositions with each other in a world where that is not often possible.Floaty Floaty is the name of the music and art trio comprised of Brian Cavallaro, Amelia Garretson-Persans, and Ian P. Hundt. Floaty Floaty has been making synth pop music and interactive art installations in Portland, ME since 2018.

Our primary tools are turntables, laptops, and mixers, but we incorporate all kinds of electronic sound recording and playback methods. With a couple tables worth of equipment, our live mixes are a cacophonous and disorienting collage, spanning a disparate range of sources. Pop songs, musique concrète, endless dance riffs, and classical flourishes are improvised through aleatoric methods and peppered with political commentary. We often refer to our work as low tech as we explore the interplay of modern consumer technology and more antiquated mediums. Trainwreck, DJ sets are improvisational and chaotic but a broken clock is right twice a day. Two different rhythms intersect to create expansive polyrhythms bending the ear to hear various musical textures like a natural ecosystem buried in technology. Our sound gives equal credence to fine art methods and outsider voices, sources, and sensibilities. Classical sounds, hip-hop methods, and punk ideology come together as we gravitate towards the Antidisciplinary school of creativity.Trainwreck, DJ is David Rogers-Berry and Geo SanGiovanni. Rogers-Berry, who goes by DRB when DJing, has studied drums since the age of 10, and DJ’d in various capacities for the last 17 years. His Gothic Americana band o’death have released 4 full-length albums and a myriad of singles and other ephemera to support their touring career, which took the band across most of North America and Europe. DJ Geo is a painter, writer, TV and radio producer, performance artist, and model. He’s written for Casco Bay Weekly, Salt, as well as hosting radio shows on WMPG and WBOR and a performance/visual art program for the Portland Media Center. He was a member of the band Primitech and a past contributor to In My Backyard and The Sacred and Profane. In addition to the sound art they make as Trainwreck, DJ, Geo and DRB contribute programs to the WMPG series Local Motives, under the subtitle, Off The Rails, where they interview local artists from a wide array of backgrounds.

Forbes: Immerse Yourself In the Intersection of Art and Music Through A Wide Array Of Dynamic Installations, Natasha Gural (Oct. 2020)