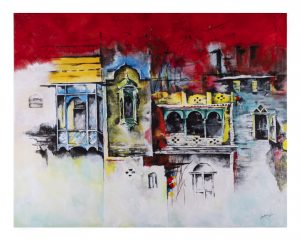 The third Art in Exodus exhibition took place in MECA’s flagship Porteous Building from May 30–June 20, 2019. Art in Exodus began in recognition of World Refugee Day, which takes place every year on June 20 and features a variety of celebrations.

“We’d like to bring back life to the Abyssinian and show our history so that other people will know we were an active and valid people at the time and still are.” June Mackenzie

The Abyssinian Meeting House is an important American cultural landmark, rich in history and full of great stories. Established in 1828, it is the third oldest African American meeting house in the country and functioned as a place of refuge, worship and community life as well as a leading contributor to The Underground Railroad. In 1866 it survived The Great Fire, and according to local folklore, fireman and member William Wilberforce Ruby saved it from the flames by covering it in wet blankets courtesy of a spring running through the building’s basement. After many years of active ministry, the Abyssinian congregation declined during the 19th century as the African American population dispersed and seventeen congregants were lost at sea. As a result, this cultural center was almost lost again in the 1970’s when it was slated for demolition by the city. But fire, shipwrecks, or threat of destruction could not end the story of the Abyssinian. The voices of the congregation live on through community elders and others who preserve the legacy and work towards a new future.

This exhibition highlights a long-term collaboration between The Abyssinian Meeting House and students in the Public Engagement Program. For this project, students interviewed African American elders in Maine and created an audio archive that captures the narratives and voices of The Abyssinian community. By documenting these stories, the partnership aimed to honor and celebrate the contribution and experience of African Americans in Maine by establishing an archive for future generations. 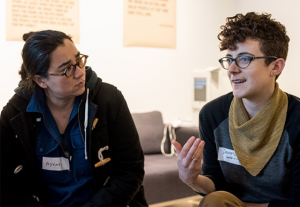 The Maine College of Art Public Engagement Program and The Abyssinian Meeting House along with the U.S. Department of Arts and Culture and organizations across the country, will invite the public to participate in the People’s State of the Union #PSOTU2018. Community members will take part in Story Circles, sharing personal experiences that reveal the state of our union. This event coincides with the exhibit Still Standing: The Abyssinian Meeting House Story Archive on view at Maine College of Art. In addition to participants engaging in Story Circles, the event will feature an introduction and performances from the Abyssinian Meeting House community and art-making activities from local socially engaged printmakers the Ears and Hands Collective.

Participants will reflect on the current state of our union and share brief stories of hope, belonging or not belonging from the past year. After the Story Circles, participants who wish can upload their stories and images to an online platform, yielding a body of stories that can be searched and shared, inspiring new ideas and new actions. This repository of stories will also provide the source material for the Poetic Address to the Nation, collaboratively composed and performed by poets from across the country that will be performed live on April 15th from the Public Theater in NYC and live-streamed with poetry, theater, music, and more.

The Poets and the Assassin

"The story of Iranian women, including their century-old battle for rights, remains with the few exceptions, untold. Though they have been in the forefront of the national struggle for independence, liberty and democracy in Iran, and have been among the most educated and most independent women in the Middle East-they entered universities in 1936 and gained the right to vote in 1963-to those in the West, their lives stay, for most part, in purdah, hidden and veiled in mystery. Ironically, their tale is one of courage, resistance, sacrifice, and survival in an intensely traditional and patriarchal society, for unlike some of their sisters, in countries near and far, they have actively participated in the public sphere to protest, ask for rights, and demand equality. A myth-buster, the play helps us see them for who they are: fearless shir-zan, fighting oppressionand tyranny-a battle that can be ours, as well."

Funding provided in part by the Maine Humanities Council.

Gathering Connections was launched in January 2017 as a collaboration between Printmaking majors Sara Inacio and Hannah Howard. As Public Engagement minors, we decided to combine our passion for print, people, and dialogue-based learning. In partnership with the Maine College of Art and Public Engagement, we have sought to establish spaces in which students from all walks of life feel welcomed and comfortable in the space while engaging in open, thoughtful dialogue on topics relevant to today. With open hands and little expectation for the outcome, the Gathering Connections dialogues have become anticipated by students of the MECA community, fostering space for potential connections to join and be made through dialogue.We hope you find yourself welcomed and connected with those around you.

Make a cup of tea and feel free to read the flags hanging about the space.We encourage you to spend as much time as you would like in this space, allowing yourself to enjoy the warm atmosphere of reflection and the gathering of connections.

As leaders of the MECA Faith group, we recognized that we wanted to have an opportunity to hear from others about their beliefs and perspectives. We hoped to create space where conversations about faith, religion, and spirituality would be in a more visible/approachable space, where there could be mutual sharing and learning.

MECA teamed up with the Justice for Women Lecture Series, presented by the University of Maine School of Law, and the USM Office of Multicultural Student Affairs to host a storytelling event and write-in on Wednesday, March 22 from 12:00pm–1:30pm in the ICA. Zainah Anwar, a leading voice in the Muslim feminist movement, encouraged others to tell their stories by sharing her own.

Print Action for the Women’s March

Professor and Program Chair of Printmaking Elizabeth Jabar and Printmaking Instructor Colleen Kinsella organized a one day open printmaking poster session to prepare for the Women's’ march on Washington. Members of the MECA community were invited into the MECA printmaking studios to screenprint posters and banners to use in the march.

The MECA Public Engagement program in collaboration with artists Elizabeth Jabar and Colleen Kinsella of Future Mothers present Provoke the Vote. Students and faculty created a visual campaign to inspire the public to participate in the electoral process and vote in the 2016 election. This special one night only event featured the Future Mothers/Future Bridges Tent and a live poster printing and postcard dissemination effort. There also was a make your own political button station created by graphic design students in the Maine AIGA Type Lab, and a Freedom Of/Freedom For interactive installation. Maine Campus Compact and the League of Women Voters were present to register voters and provide information. The project opened on first Friday, October 7 outside The Red Thread at One City Center and ran from 5-8PM. 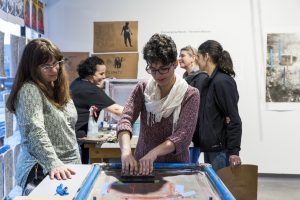 Future Mothers + Mobile Print Power + Print Lab + Zine Fair
For the exhibition Collective Actions II, the Future Mothers art collective, and multi-generational NYC collective Mobile Print Power, with student artists from MECA Zine Club, are collaborating on an interactive Print Lab. The artists will partner with students, artists, activists, educators and community members on public programming. This includes participatory workshops such as screen printing, stitching, and zine making. Through these workshops, participants will have the opportunity to engage in creative projects and explore urgent social and political issues.

The Print Lab features the Future Bridges tent, the Mobile Print Power silkscreen cart, and the Zine Fair. These three distinct but complementary projects employ socially engaged art practices and draw on printmakings rich history of collaboration, dissemination and public action. Each of these projects highlight the potential and power of co-creation and collective action as a force for social change and community building.

This interactive project space is designed to stimulate dialog and facilitate engagement on a range of topics and encourages gallery visitors to participate, learn, take away, discuss and activate the ICA.

Mobile Print Power + Soñamos Sentirnos Libres: Making it Real Mobile Print Power (MPP) is a multi-generational collective based out of IMI Corona, in Queens, NY. We use silkscreen printmaking and participatory design in public space to engage communities and explore social and cultural situations. Since 2013 we have created public projects throughout NYC, including regular projects in Corona Plaza, Queens. We have published seven books, including Message from Corona Plaza and Solidarity, Solidaridad, and exhibited at museums, universities, and galleries, such as The New School, Columbia University, and the Queens Museum. We regularly collaborate with local organizations and collectives that positively impact our community, creating workshops and public projects that engage urgent issues such as brown-black solidarity, health equity, and immigrant rights.

Mobile Print Power: facilitated workshops and public printing event with MECA Printmaking and Public Engagement students, students in the group MECA FAITH, and community partner Survivor Speak. Survivor Speak assists survivors of all forms of sexual exploitation including human sex trafficking. Though the needs for a survivor just coming out of an exploitative situation are basic; they are difficult to access and more importantly these needs are long term. Undoing the trauma of having been victimized, can be a long lonely journey. Survivor Speak connects new survivors to recovered survivors. Survivor Advocacy Leadership Training (SALT), a curriculum rooted in our mission, provides survivors with a structured path to recovery; including empowering each participant to gain individual and group leadership skill to be an organized collective cohesive voice of today's survivor.

Soñamos Sentirnos Libres: Making it Real is an evolution of the exhibition Soñamos Sentirnos Libres: Under Construction, which ran at Interference Archive in Brooklyn from May-September 2016. The collaboration utilized the archive’s historical resources to draw connections between past and current struggles for the rights of immigrants, intentionally prioritizing the voices of youth, undocumented folks, and women. This version of the exhibition highlights some of the collaborative work produced throughout its initial run at Interference Archive. Here, at Maine College of Art, a series of public events will engage different communities with the ideas behind MPP’s work, including collaboration, immigrant identity, and the role of the artist. With this latest iteration of Soñamos Sentirnos Libres, we will explore these concepts within a new context--both responding to the local context of Portland, Maine, and to the charged political atmosphere post-election, especially around immigrant rights and the question of who “belongs” in America.